Cynthia Kaye Federer is the daughter of Jesse Federer and Catherine Perkins.

David Franklin Federer is the son of Jesse Federer and Catherine Perkins.

Lynda Diane Federer is the daughter of Jesse Federer and Catherine Perkins.

Michael Anthony Federer is the son of Jesse Federer and Catherine Perkins.

Robert Eugene Federer is the son of Jesse Federer and Catherine Perkins.

— Irene P. Vrzal, 89, long time Montgomery resident, passed away Wednesday, May 12, 2010 at The Villages in Lonsdale.

Irene was born August 30, 1920 to Charles and Ida Fehlandt in Jordan, MN. She attended school in Jordan and furthered her education in Mankato, MN. She was united in marriage to Harry S. Vrzal of Montgomery, on June 8, 1943 in North Branch. Prior to her marriage, she worked as a waitress in Jordan and was also a meter reader. After her marriage to Harry, she worked at Ruhlands Red Owl and raised six children. Irene and Harry owned and operated the Brass Rail in Montgomery for over 30 years. After selling the Brass Rail in 1974, Irene was busy working for Minnegasco, Holy Redeemer Parish, was a volunteer driver for Meals on Wheels, and also helped at the Peace Center in New Prague. Irene was a member of Holy Redeemer Catholic Church in Montgomery, where she was a communion distributor, choir member and also did alter care. She was very active in the Council of Catholic Women (CCW), Knights of Columbus Auxiliary, Mission Sewing, Red Hat Society, and many other things that kept her on the go. Irene loved spending time with family and friends, which is very evident in her involvement in her card clubs, bingo parties, Senior Citizens, and so many other activities. Her hobbies included, fishing, sewing, crocheting, snow blowing, gardening, canning, and riding on her lawn mower. Nothing made her happier than being surrounded by her children, grandchildren and great grandchildren who referred to her as Grandma Moosh. Irene touched many lives with her warm smile, reassuring hugs, and her contagious laughter.

Preceding her in death was her husband Harry, her parents, two sisters, a brother, and a great grandson.

Funeral Services will be held at the Holy Redeemer Church in Montgomery on Tuesday, May 18, 2010, at 10:30 AM, with Rev. David Barrett officiating.

Interment will be at Calvary Cemetery in Montgomery.

Visitation will be held at Holy Redeemer Church on Monday, May 17th from 4:00 – 8:00 PM and also one hour prior to Funeral Services.

Irene’s loving spirit will be greatly missed by her family.

Funeral arrangements by the Keohen Memorial Funeral Home in Montgomery.3 Her Social Security Number was 471-12-0669 issued in Minnesota, SSDI lists born 30Aug1920 and died 12May2010. She was buried on 17 May 2010 at Calvary Cemetery, Montgomery, Le Sueur Co., Minnesota.3,4 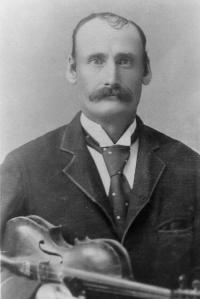 New York Town Clerks' Registers of Men Who Served in the Civil War listed Adin Fellows. He enlisted on 17Jun1863 as a Private in the 8th Artillery. Discharged 07Jun1865.3 Adin Fellows was a Carpenter. He married Viola Pettit in 1871 at New York.

There was an Adin Fellows in the 1890 Nebraska Special Census of Veterans (Family History Library microfilm 338196) taken in June of 1890. Listed in enumeration district 53, supervisor's district 2. Adin was enumerated in what appeared to be Kearney?, Buffalo Co., Nebraska, house number 85. The Census did not list rank, company or any enlistment data for Adin Fellows.

There was an Albert Fellows listed on the same page of the Census as Adin, at house number 92. Albert was listed as a Corporal in the Illinois 39th Infantry, and had been a prisoner at Andersonville. Adin was listed in the 1900 Census in his son, George's household. The 1900 Census stated Adin's father born NY and mother in VT. Adin was admitted to the home for disabled veterans when he was 53 years old.4 Adin Fellows died on 29 October 1914 at General Hospital, Kansas City, Jackson Co., Missouri, at age 70.1,5

The Death Certificate for Adin Fellows lists father as William Fellows (born in Connecticut) and mother as Lizzie Coble? (born in Michigan). Have not seen that name before as Adin's mother, additional research required.1 He was buried on 10 November 1914 at Union Cemetery, Missouri,      (gravestone not found in either 1986 or 2011 surveys of cemetery.)1,5

ALBERT FELLOWS is a prosperous farmer in Grant Township, and one of the first settlers of Buffalo County. He was born April 6, 1840, at Cambria, Niagara County, N. Y. His father, William L. Fellows, a wheelwright, was a native of Connecticut. His mother, Polly (Higby) Fellows, was a native of New York State, and was born in the year 1826. There were five children, four boys and one girl, in the paternal family, of which Albert is the third. Albert resided at home the greater part of his time until twenty-one and was engaged in farming and attending the neighboring school. In 1861 he emigrated West and located at Pontiac, Livingston county, Ill., where soon after he responded to his country's call and enlisted August 28, 1861, in Company C, Thirty-ninth Illinois regiment. The first battle in which he participated was in the Shenandoah Valley, with Gen. Shields in command on the Union side and Gen. Jackson on the rebel side. The rebel forces were not only treated to a severe whipping but were routed and driven in hot haste down the valley. The next battle in which he took an active part was fought at Port Royal, after which his regiment was ordered to Harrison's landing and finally to South Carolina. He was through the siege of Ft. Wagner and participated next in the battle at Chapin's farm and a little later in the battle of Bermuda Hundred, at which he was captured May 16, 1864, and taken to Petersburgh, where he was confined for two weeks and then transferred to Andersonville prison, where he remained from June 1st to September 19th, and was then taken to Charleston, kept two weeks and finally taken one hundred miles north to what was known as the Florence stockade, where he remained until December 10th, and was paroled. Out of eleven men captured from his company at the same time and confined in Andersonville, only five lived to get out. There were thirty-five thousand prisoners confined in Andersonville at the time he was there, and the story of his experience and what he there witnessed is heart-rending in the extreme. After being paroled, he went to Annapolis, Md., received a thirty-day furlough, came home and returned again, shortly after which, February 19,1865, he was mustered out. Although in his three and one-half years of experience in the war, he was never wounded, he had his gun shot from his hands at one time and two bullet holes put through his clothes at another. After being discharged he returned to Pontiac, Ill., and followed farming for four years, after which he moved to Tazewell county, Ill., where he farmed for two years, and in April, 1872, emigrated West and located in Buffalo county, Nebr. He took up a homestead six miles west of Kearney in Odessa Township. There were but few settlers in this section of the state at that time, and wild game, deer, antelope, elk, etc., were quite plentiful, and buffalo were not infrequently killed. There were many Indians along the Platte River and for the first two years proved very troublesome. One afternoon, when Mr. Fellows was away from home, and a neighbor woman was staying with Mrs. Fellows, a band of eighteen Indians stopped at the house and made threatening demands, whereupon the two women fired several loads from the barrels of a couple shot guns at them, and the Indians fled at full speed, hallooing, "brave squaws." In the grasshopper times, 1874-76, Mr. Fellows lost all his crops and was compelled to haul corn from Red Cloud, Kans., a distance of ninety miles. He finally sold his claim for $350 and later bought the claim on which he now resides in the Wood River valley. He was burned out at one time and had nothing left but his team, wagon and some household goods. He was married, September 14, 1865, to Margaret Haines, who was born June 17, 1845, and is a native of Illinois. Their union has resulted in the birth of eleven children, as follows - Harriet E., August 10, 1867; William L., June 11, 1869; Emma J., May 9, 1871; John F., September 8, 1872; Alberta, July 7,1874; Francis M., July 22, 1876; Albert, June 24, 1878; Guy, August 24, 1880; Lee, January 28, 1883; Grace, April 17, 1885; Jessie, March 5, 1888. In political matters Mr. Fellows is a democrat.1 Albert Fellows died on 9 August 1907 at Amherst, Buffalo Co., Nebraska, at age 67. He was buried at Stanley Cemetery, Amherst, Buffalo Co., Nebraska.2

Bertie Fellows was born circa 1875 at Nebraska info from 1880 Nebraska Census. She was the daughter of Albert Fellows and Margaret M. Haines.

Connie Fellows was the daughter of Thomas Walter Fellows and Marie Gertrude Lingelbach.