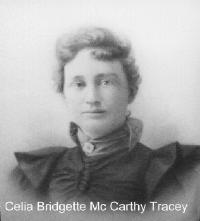 Ronan, Jan. 8. Mrs. Celia Bridget Tracey, 88, died at the home of a daughter, Mrs. N. K. Boice, Polson, following an illness since Christmas. Funeral services will be held at the Polson Catholic church at 10 o'clock Saturday morning. Rev. Father J. Kennedy will officiate and burial will be in Lake View cemetery. The body is at the Shrider mortuary here. Mrs. Tracey was born May 26, 1859, at Faribault. Minn. She made her home at Weldon before coming to Lake county in 1926. She was married to John Tracey at Faribault and he died years ago. She is survived by the daughter, Mrs. Boice of Polson and four sons, Frank J. Tracey, Polson; Bernice S. Tracey, Columbia Fails; Harry J. Tracey, Harlem, and F. Dewey Tracey, Oakanognan, Wash. Also by 16 grandchildren and 18 great-grandchildren.1 Bridgett was living in Waldon, MT in Dec 1920, according to Florence's obituary. According to Bridgett's Death Certificate, lived in Polson-MT for past 22 years, and was and born 26May1859.

The following obituary is from the Faribault Daily News:
McCARTHY - Joseph McCarthy passed away at his home on South Willow street Saturday evening at 9 o'clock after a long illness. The deceased had lived in Faribault practically all of his life, his parents being numbered among the first settlers that came to Faribault, coming by ox team from Red Wing about 1855. Joseph McCarthy was born on Third avenue in this city May 4, 1865 and received his education in the local parochial schools and the high school. He was married to Miss Anna Madden of May County, Ireland, Nov. 5, 1895, to which union six children were born, only one of them surviving. He leaves to mourn his loss, his wife, his only child, Mrs. Mary Howard of this city; three brothers, John of Minneapolis; Daniel, of Hastings, Minn., and Jerry McCarthy of Faribault and one sister Mrs. Cecelia Tracy of Weldon, Montana. Funeral services will be held at the Church of the Immaculate Conception Tuesday morning at 9 o'clock.

There were multiple hearings in Rice County, Minnesota regarding Daniel being committed for insanity. The first time Daniel was committed was on 27 Oct 1906, by his brother Joseph. The later records indicate he had been in the Rochester State Hospital. His reason for insanity appears to be the habitual use of narcotics, intoxicating liquor, and self-abuse. Both Probate records indicate that two of his cousins on his father's side were insane. Daniel died of carcinoma of the head of the pancreas, obstructive jaundice, and metastases to liver. 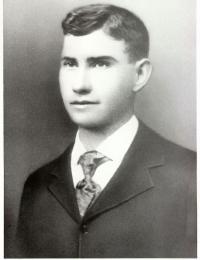 
Letter from Claire Kassinger 9/1994, stated that her father, Florence James was sick for a number of years before his death. He had a very crippling form of arthritis. She remembered him only walking on crutches or being confined to bed. He taught school in rural areas around Rice County for 20-years. The last year he taught in New Prague and was on crutches.

Following obituary was in the Faribault Daily News:
McCARTHY - James Florence McCarthy died at his home Thursday morning at 8 o'clock, Dec. 16, after being confined to his bed five years with sciatic rheumatism and other complications. He was born in Faribault June 22, 1874, and received his education in the parochial and public schools, and is a graduate of Faribault high school and Mankato normal school. For 21 years he was successful as a teacher in many of the rural schools of Rice county and was well liked by all who knew him.
In 1899 he was united in the holy bonds of matrimony at St. Patrick's church in Shieldsville to Florida LaPierre of Faribault who, with six children, survives. The children are: Miss Emily, of Faribault; Mrs. Esther Barry, of Chicago; Albert, Henry, Cressa and Leah, at home. He also leaves five brothers and one sister; Charles of Mexico City, N.M; John, of Minneapolis; Daniel, of Hastings; Jerry and Joseph, of this city, and Mrs. J.M. Tracey of Waldon, Mont. He was a patient sufferer for many years, always bearing his suffering with a smile. His funeral was held Saturday morning at 10:30 at St. Patrick's church, Rec. Father Malloy officiating. His body was laid to rest at St. Patrick's cemetery.

Emily died at the Nevada State Hospital, after a stay of 4 1/2 months. She had Chronic brain syndrome associated with disturbance of metabolism, growth or nutrition. This contributed to death but was not related to the immediate cause of death: Brain atrophy and Alzheimer's Disease. Emily's usual residence was at 1324 Pacific Ave., Las Vegas, Nevada. She had moved to Las Vegas, Nevada in 1946.

Children of James and Florida LaPieirre: Claire Kasinger, Albert D. McCarthy and Esther Barry. Taken near Faribault, Minnesota in the early 1970s.
Esther Charlotte McCarthy was born on 13 March 1902 at Erin, Rice Co., Minnesota.4 She was the daughter of Florence James McCarthy and Florida Louise LaPierre. Esther Charlotte McCarthy married Basil Francis Barry, son of James Charles Goodman and Elizabeth Carrie Reeves, on 15 May 1920 at Minneapolis, Hennepin Co., Minnesota.5,6 Esther Charlotte McCarthy died on 5 December 1996 at Hesperia, Oceana Co., Michigan, at age 94.7 She was buried at Christ the King Cemetery, Hesperia, Oceana Co., Michigan, Find A Grave, database and images (https://www.findagrave.com : accessed 03 January 2020), memorial page for Esther C McCarthy Barry (13 Mar 1902–5 Dec 1996), Find A Grave Memorial no. 26752948, citing Christ the King Cemetery, Hesperia, Oceana County, Michigan, USA ; Maintained by generep (contributor 46978801) .
Her married name was Barry. She graduated circa 1920 at Bethlehem Academy, Faribault, Rice Co., Minnesota. She lived in 1928 at Chicago, Cook Co., Illinois. Esther was living in Chicago-1928, according to sister's obituary. She lived at Hesperia, Oceana Co., Michigan. Letter from Claire Kassinger dated 9/1994 stated about Esther: "She had a stroke about six years ago and is confined to her bed and wheelchair. She lives with her son in Michigan. Esther graduated from Bethlehem Academy (in Faribault, MN) in 1919 or 1920."

Albert had 12 years of education, worked for 50 years as leather worker. Albert lived 46-years in Los Angeles County prior to death. Chronic pulmonary disease contributed to death. Albert had lived at 26377 B. North Oak Highland, Newall, Calif. Albert moved from Minnesota, to Chicago, to Oregon. Then, about 1940, moved to California. Albert lived in Faribault, MN in 1920, according to his father's obituary.

The following obituary is from the Faribault Daily News, 16 Dec 1941.
Funeral services for Henry McCarthy, 34 years old, who passed away Friday December 5, were held Tuesday, December 9, at 9 o'clock from the Immaculate Conception church with the Rev. John P. Foley, pastor, officiating. Intement was in St. Lawrence cemetery. Pallbearers were Victor Duchene, John Driesen, Thomas O'Neil, Pat Zabel, Joseph Gillighan and Allen Cook. Mr. McCarthy was born December 24, 1904, in Sandstone, Minn. He lived in Shieldsville until 1921. On September 8, 1926, he married Irene Ronhovde in Faribault where they have made their residence since. Mr. McCarthy attended Faribault high school for one year and completed the four year course of the American Correspondence school in Chicago. He also had completed a course from the National Radio Institute and was studying the New Encyclopedia of Machine Shop Practice and Procedure to qualify for defense work. He was employed as a radio repairman and salesman.
He is survived by his widow, two sons, Kenneth and Stephen, one daughter, Elaine, his parents, Mr. and Mrs. John Quinn, one brother, Albert, of Chicago, and three sisters, Mrs. Alvin Green of Waseca, Mrs. Basil Berry and Mrs. Cleveland Kesenger of Chicago. Out of town friends and relatives at the funeral were Mr. and Mrs. Magers and Mr. and Mrs. Arthur Anderson of Peru, Ind; Mrs. George Barnholds, Stillwater; Mr. and Mrs. Harold Tripp, Minneapolis; John Ronhovde, Duluth; Mr. and Mrs. Robert Fleming, Vernon Center; Mr. and Mrs. George LaPierre, Lonsdale; Eugene LaPierre and son, Roman, St. Paul.

The Death Record for Henry McCarthy, said he was an attendant at the State School for Feeble Minded, and listed Henry as born on 24 Dec 1906. The death record stated that Cultures from State, showed Henry's Meningitis was due to Strep Hemolyticus.

Letter from Claire Kassinger dated 9/1994 states that her sister Leah was born in 1909 and died at age 18. "My understanding is that she was a premature baby and probably had Cerebral palsy. She was very intelligent and she was able to read and print although there was no school or other help for her as there is for handicapped children today."

Cleveland and Claire Kassinger taken in the early 1970s in Faribault, Minnesota

Children of James and Florida LaPieirre: Claire Kasinger, Albert D. McCarthy and Esther Barry. Taken near Faribault, Minnesota in the early 1970s.
Claire Marie McCarthy was born on 15 March 1909 at Erin Twsp., Rice Co., Minnesota.4 She was the daughter of Florence James McCarthy and Florida Louise LaPierre. Claire Marie McCarthy married Cleveland Kassinger, son of Alvis Kassinger and Sarah Hedge, on 30 April 1937 at Chicago, Cook Co., Illinois.5 Claire Marie McCarthy died on 19 July 2003 at St. Lucas Care Center, Faribault, Rice Co., Minnesota, at age 94.6 She was buried at Saint Lawrence Cemetery, Faribault, Rice Co., Minnesota, Find A Grave, database and images (https://www.findagrave.com : accessed 03 January 2020), memorial page for Claire Kassinger (1912–2003), Find A Grave Memorial no. 71758770, citing Saint Lawrence Cemetery, Faribault, Rice County, Minnesota, USA ; Maintained by BJ (contributor 46879813) .
Her married name was Kassinger. She lived in July 1995 at 117 E. Paquin St., Apt 208, Waterville, Rice Co., Minnesota. She lived at 715 N. Central Ave., Faribault, Rice Co., Minnesota; Claire had continued living at this address after Cleve had died, and then around 1997, she moved to Waterville, MN. Birth Record lists name as Clara Marie, born 05Sep1909 and mother as Florida Stone.
Letter from Claire Kassinger dated 9/1994 states: "My mother was French and some of her siblings used the English name 'Stone' instead of the French translation 'La Pierre'. My mother always used the name as 'La Pierre'. I had no middle name, but took the name "Patricia" when I was confirmed. My father disliked the name of 'Florence' and often wrote his name as F. James McCarthy."

Claire McCarthy Kassinger 1912-2003.
Faribault - Claire Kassinger, 91 died suddenly at St. Lucas Care Center on July 19, 2003, while recovering from a fall. A memorial service will be held at a later date.

Claire was born in the Shieldsville area on March 15, 1912, the daughter of Florence James McCarthy and Florida LaPierre. The family moved to Faribault upon the death of her father in 1922.

Claire married Cleveland Kassinger, her lifelong companion; and they lived their professional lives in Chicago. Claire was employed as the paymaster of a railroad headquartered in Chicago. Upon retirement Claire and Cleveland returned to Faribault living at Cedar Lake and Boulder City, Nev.

Following the death of her husband in 1995, Claire lived in Faribault, Waterville, and Northfield, most recently at Keystone and Alterra.

She was preceded in death by her husband, Cleve Kassinger; brothers, Albert and Henry McCarthy; and sisters, Esther Barry of Hesperia, Mich., and Emily Green of Las Vegas, Nev. She is survived by many nieces, nephews and cousins, including area residents, Joan LaPierre, and Steve and Rosalie McCarthy. She was much loved by her family who enjoyed her funny stories, and generous love and care.

Children of Alice Marie McCarthy and Russell I. Morgan

Child of Kenneth Iver McCarthy and Rita A. Friesen

Elaine Mary Rene McCarthy "Dee" QUINN Obituary
Daughter of Irene and Henry McCarthy, passed away on February 10. She was 79. She leaves behind her brother Steve and her children Shannon, Foley, Devin and Colin. She was preceded in death by husband Richard "Dick" Quinn, their daughter Kelly, her parents and her brother Ken. Family and friends will honor Elaine on July 5, 11 a.m. at Parker Kohl Funeral Home, Faribault, MN. An excellent cook, dancer, badminton player and a champion shopper, Elaine lived on a rambling farm in Somerset, Wisconsin. An avid traveler, she took her kids to Ireland, dined with the Guards of the Tower of London, touched the statue of David in Florence. Elegant, professional and fair, Elaine managed some of the top Twin Cities venues: The Monte Carlo Club, Windows at the IDS, Freight House, Holiday Inn. Elaine loved dark chocolate, a good glass of wine, infectious laughter, and the company of her family.
Published in Pioneer Press on July 1, 2018.3

Child of female (?) and Peter McGinnis