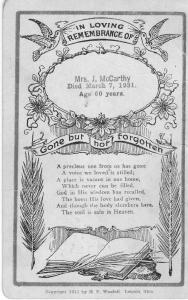 The following obituary is from Faribault Daily News, 09Mar1931, pg 1, col 7.
Funeral services for Mrs. Jeremiah McCarthy, who died at the home of her son William McCarthy, 121 Frink Avenue, on Saturday morning, were held this morning form the Church of the Immaculate Conception at 9 o'clock. Burial was made in Calvary cemetery. The deceased was born in Faribault sixty years ago and had lived here throughout her life. She is survived by four sons, William, Frank, and James, all of Faribault, and John of Wisconsin. A brother and sister, William and Annie McGinnis of Minneapolis also survive.

Peter McGinnis was born at Ireland. He married female (?)

Child of Peter McGinnis and female (?)

Theresa McGinnis was born circa 1879 at Minnesota CENSUS: 1885 MN, Rice Co., Faribault, listed as 7 years old. She was the daughter of William McGinnis and Mary N. Smith. Theresa McGinnis died circa 1901.1 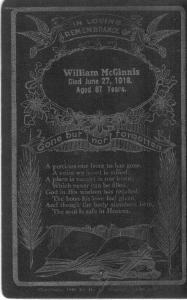 History of Rice County, published in 1882, by Charles S. Bryant, provides a list of old settlers into Rice County, by the Old Settlers Association. William McGinnis is recorded as having come to Rice County from Ireland, in June of 1856.


Following is an obituary from The Faribault Pilot newspaper on 04Jul1918 Thursday, page 1, column 5.
William McGinnis, a pioneer and highly respected citizen of Faribault, died at home on North Central avenue, Thursday afternoon, June 27. Death came after a lingering illness of several week's duration.
Deceased was 87 years of age and was born in Ireland. He came to Minnesota in 1856, locating in Waseca county on a farm, later coming to Faribault. He was married in 1860 to Miss Mary Smith of Faribault, who died several years ago. In 1862 he engaged in business in Faribault, which he conducted continuously for many years before retiring from active business. Mr. McGinnis was a kind-hearted, upright man, strictly honest in all his dealings. To have him for a friend was to know he as true friend. He was honored and respected by a large circle of friends, who sincerely mourn his death.
He is survived by two sons, Frank and William, of Minneapolis, and two daughters, Mrs. Mary McCarthy and Miss Anna McGinnis, of this city. The funeral took place Saturday morning at 10 o'clock, from the Immaculate Conception church in this city. Monsignor J.J. Slevin celebrated a requiem mass and delivered a eulogy in which he paid a high tribute of respect to the life and character of the deceased. The Ancient Order of Hibernians, of which the deceased was an honory (sic) member, attended the funeral. Interment was in Calvary Cemetery. The pallbearers were T.J. McCarthy, John Anderson, Richard Murphy, Joseph Coughlin, D.T. Cruikshank and Garrett Moore.


Following is an obituary from The Faribault Weekly Journal on 3Jul1918 Wednesday, page 4, column 4.
William McGinnis, a pioneer resident of Faribault, died at his home on Central avenue on Thursday morning, at the age of 87 years. Mr. McGinnis had lived in Faribault for the past sixty years and was well known here. He was one of the early city fireman. Funeral services were held Saturday morning from the Church of the Immaculate Conception and burial was in Calvary cemetery, Monsignor Slevin officiating.


Rice County Death Record for William McGinnis, listed his occupation as "Rtd mch" and the cause of death being Pyelonephritis.

Following from The Red Wing Daily Republican Eagle, 7:5, 21Oct1954.
Mrs. Ellen Mary Seiz, 98-year old resident of Red Wing, died this morning at her home, 419 Jackson street. She had been in failing health the past two years. Born at Sullivan's Island, S.C., February 6, 1856, she was the daughter of Mr. and Mrs. Alec McGuinn. When she was 12 years of age the family moved to Akron, Ohio. She was married to William G. Seiz May 9, 1877, at Akron and the couple resided there until coming to Red Wing in 1891. She had made her home here since that time. Mr. Seiz, who was superintendent of Red Wing Sewer pipe company factory B, died in 1915. She was a member of St. Joseph's Catholic church and the Ladies Aid of the church.
Survivors include two daughters, Christine Seiz of Red Wing, and Mrs. William D. (Alice) Evans of Dayton, Ohio; four sons, William of Milwaukee, Wis; Frank M., of St. Paul, Thomas, and Ben of Red Wing; three sisters, Mrs. J.J. Lally, Mrs. Mary Tracy and Mrs. Margaret Gihoolley all of Akron, Ohio; 27 grandchildren, 47 great grandchildren and 18 great-great grandchildren. Four children preceded her in death. Funeral services will be held Monday at 9 a.m. at St. Joseph's Catholic church with the Rev. Derham Ryan officiating. Internment will be in Calvary cemetery.

Benjamin McGuire is the son of Matthew J. McGuire and Susan Elizabeth Fox.1

Declan McGuire is the son of Matthew J. McGuire and Susan Elizabeth Fox.1

Fox McGuire is the son of Matthew J. McGuire and Susan Elizabeth Fox.1

Child of Donald McIntyre and Betsy (?)