Child of Mary (?) and John Featherstone

Polly Higby was born circa 1813 at New York info from 1850 Ohio Census. She was born in 1826 at New York.2 She married William Leander Fellows.
Her married name was Fellows.

George Fellows was born circa 1834 at New York info from 1850 Ohio Census. He was the son of William Leander Fellows and Polly Higby. George Fellows died in 1858 at California.

Albert Fellows was born on 6 April 1840 at Cambria, Niagara Co., New York.1 He was the son of William Leander Fellows and Polly Higby. Albert Fellows married Margaret M. Haines on 14 September 1865.1 Albert Fellows died on 9 August 1907 at Amherst, Buffalo Co., Nebraska, at age 67.
ALBERT FELLOWS is a prosperous farmer in Grant Township, and one of the first settlers of Buffalo County. He was born April 6, 1840, at Cambria, Niagara County, N. Y. His father, William L. Fellows, a wheelwright, was a native of Connecticut. His mother, Polly (Higby) Fellows, was a native of New York State, and was born in the year 1826. There were five children, four boys and one girl, in the paternal family, of which Albert is the third. Albert resided at home the greater part of his time until twenty-one and was engaged in farming and attending the neighboring school. In 1861 he emigrated West and located at Pontiac, Livingston county, Ill., where soon after he responded to his country's call and enlisted August 28, 1861, in Company C, Thirty-ninth Illinois regiment. The first battle in which he participated was in the Shenandoah Valley, with Gen. Shields in command on the Union side and Gen. Jackson on the rebel side. The rebel forces were not only treated to a severe whipping but were routed and driven in hot haste down the valley. The next battle in which he took an active part was fought at Port Royal, after which his regiment was ordered to Harrison's landing and finally to South Carolina. He was through the siege of Ft. Wagner and participated next in the battle at Chapin's farm and a little later in the battle of Bermuda Hundred, at which he was captured May 16, 1864, and taken to Petersburgh, where he was confined for two weeks and then transferred to Andersonville prison, where he remained from June 1st to September 19th, and was then taken to Charleston, kept two weeks and finally taken one hundred miles north to what was known as the Florence stockade, where he remained until December 10th, and was paroled. Out of eleven men captured from his company at the same time and confined in Andersonville, only five lived to get out. There were thirty-five thousand prisoners confined in Andersonville at the time he was there, and the story of his experience and what he there witnessed is heart-rending in the extreme. After being paroled, he went to Annapolis, Md., received a thirty-day furlough, came home and returned again, shortly after which, February 19,1865, he was mustered out. Although in his three and one-half years of experience in the war, he was never wounded, he had his gun shot from his hands at one time and two bullet holes put through his clothes at another. After being discharged he returned to Pontiac, Ill., and followed farming for four years, after which he moved to Tazewell county, Ill., where he farmed for two years, and in April, 1872, emigrated West and located in Buffalo county, Nebr. He took up a homestead six miles west of Kearney in Odessa Township. There were but few settlers in this section of the state at that time, and wild game, deer, antelope, elk, etc., were quite plentiful, and buffalo were not infrequently killed. There were many Indians along the Platte River and for the first two years proved very troublesome. One afternoon, when Mr. Fellows was away from home, and a neighbor woman was staying with Mrs. Fellows, a band of eighteen Indians stopped at the house and made threatening demands, whereupon the two women fired several loads from the barrels of a couple shot guns at them, and the Indians fled at full speed, hallooing, "brave squaws." In the grasshopper times, 1874-76, Mr. Fellows lost all his crops and was compelled to haul corn from Red Cloud, Kans., a distance of ninety miles. He finally sold his claim for $350 and later bought the claim on which he now resides in the Wood River valley. He was burned out at one time and had nothing left but his team, wagon and some household goods. He was married, September 14, 1865, to Margaret Haines, who was born June 17, 1845, and is a native of Illinois. Their union has resulted in the birth of eleven children, as follows - Harriet E., August 10, 1867; William L., June 11, 1869; Emma J., May 9, 1871; John F., September 8, 1872; Alberta, July 7,1874; Francis M., July 22, 1876; Albert, June 24, 1878; Guy, August 24, 1880; Lee, January 28, 1883; Grace, April 17, 1885; Jessie, March 5, 1888. In political matters Mr. Fellows is a democrat.1 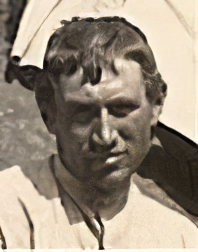 
FRANK NESTAVAL SEEKS DIVORCE
The following account of a divorce action is from the Omaha. (Neb.) *Bee. The Nestavals formerly lived here. Mr. Nestaval having been a mail carrier. “Frank Nestaval says his wife. Euphemia McLeod Nestaval, whom he married at Vesta. Minn. February 11, 1907, deserted him November 21, 1918. He also names Galvin Waters of Minneapolis as correspondent. There are two children, Joseph, 13, and Velma, 8, who he says, have been with him since their birth. He asks the court only for absolute divorce and the permanent custody of the children.
Date: July 26, 1921
Title: Salida Mail
Location: Salida, Chaffee County, CO
https://www.coloradohistoricnewspapers.org/cgi-bin/colorado?a=d&d=SDM19210726-01.2.4&e=-------en-20--1--img-txIN%7ctxCO%7ctxTA-nestaval-------0--


MRS NESTAVAL DENIES CHARGES OF HUSBAND
Mrs. Euphemla Nestaval will not let her husband, Frank Nestaval, former Salida mail carrier, have a divorce without a contest. Mr. Nestaval filed suit for divorce in Minneapolis and she says this action was filed before her husband filed suit in Iowa, an account of which appeared in the Omaha Bee, was republished in The Mail. Calvin Waters is named as a corespondent by Mr. Nestaval, concern which Mrs. Nestaval writes; “I knew Mr. Waters as I knew all of the merchants of Salida while a resident there, but no better, and I have never corresponded directly, or indirectly, with Mr. Waters, nor heard from him since coming to Minneapolis, where I have resided continously since leaving Salida, nearly three years ago, nor had Mr. Nestaval made any charges against us until after I had started a divorce action in Minneapolis on the grounds of cruel and inhuman treatment. "I left Mr Waters on account of his brutal abuse of me and because he threatened my life. I had papers served on him at Council Bluffs, la. Mr. Nestaval has not filed answer to my complaint In Minneapolis nor has he sent me a copy of his complaint, although two letters have been addressed to his attorney requesting a copy. ‘I shall contest his false charges at Council Bluffs. “1 have a great many friends In Salida and I feel that if I were silent on his charges, it might be taken by some as an admission on my part of their truth.
Date: August 12, 1921
Title: Salida Mail
Location: Salida, Chaffee County, CO
https://www.coloradohistoricnewspapers.org/cgi-bin/colorado?a=d&d=SDM19210812-01.2.13&e=-------en-20--1--img-txIN%7ctxCO%7ctxTA-nestaval-------0--

A CORRECTION
In an article published last Friday in The Mail regarding the divorce action of the Nestavals, Mrs. Euphemla Nestaval is quoted as saying "I left Mr. Waters on account of his brutal abuse of me and because he threatened my life." The name of Mr. Waters was here printed in error instead of Mr. Nestaval, and Mrs. Nestaval’s letter was incorrectly quoted. Mrs. Nestaval denied all the changes made against her by her husband in his divorce complaint.
Date: August 16, 1921
Title: Salida Mail
Location: Salida, Chaffee County, CO
https://www.coloradohistoricnewspapers.org/cgi-bin/colorado?a=d&d=SDM19210816-01.2.7&e=-------en-20--1--img-txIN%7ctxCO%7ctxTA-nestaval-------0--

SUMMONS .
STATE OF COLORADO , County of Chaffee , In the County Court . No . 2935
Frank Nestaval , Plaintiff . vs .
Euphemia Nestaval , Defendant .
The People of-the State of Colorado To Euphemia Nestaval, the Defendant Above Named—Greeting :
You are hereby required to appear in an action brought against you by the above-named plaintiff , In - the County Court of Chaffee County , State or Colorado , and plead to the complaint therein within thirty days after the . service hereof , if . served within the State of Colorado ; or if served out of the State of Colorado , or by publication , within fifty days after the service hereof exclusive of the day of service, or said action may : be regularly set for trial the same as though ; such appearance had been made and Issue had been joined on such complaint .

The said action is brought by plaintiff to obtain a decree of divorce ,-dissolving the bonds of matrimony -now existing between plalntlff and defendant , on the ground of extreme and repeated acts of cruelty , of defendant-toward the plaintiff , and for the custody of two minor children to be awarded tho plaintiff , as will more fully appear from the- complaint , in said action to which reference is hereby . made and a copy of which ; is hereto attached ,

In 1926 Frank Nestaval was a letter carrier.5 The cause of death was cerebral embolism on 7 October 1926.5