Nellie Harn was born on 9 January 1881.2,3 She was the daughter of Jonathan Harn and Mary Levingston. Nellie Harn died on 27 July 1899 at age 18.2,3 She was buried at Saunders-Blackaby Cemetery, Bryant, Fulton Co., Illinois.3

Nellie Harn was born in 1868 at Pennsylvania estimated birth date from 1880 Census. She was the daughter of Thornton Harn and Margaret (?)

Nicholas William Harn is the son of Steven Michael Harn and Barbara Welling.1

Following is an abstract of an undated obituary from an unknown newspaper.
Harn, Oliver Cromwell, died Oct. 17, 1932. He was born May 22, 1851, son of Samuel D. and Mary Moore Harn. A prominent shoemaker and native of McClellandtown, where he spent his entire life. On Dec. 25, 1877, he married Elizabeth Huhn, who survives along with two children; Mrs. S.O. McCormick (Evelyn B.) of New Salem & E.B. Harn (Emmons B.) of Baltimore, Md. and 3 grandchildren.

The following was in the book, WHO'S WHO ON THE PACIFIC COAST - 1949.
In 1949, Orlando Clinton Harn was General Counsel for Audit Bureau of Circulations. Born in Dayton, Ohio, on March 25, 1871. Orlando Clinton Harn was a student at Ohio Wesleyan Univ., Ph. B. (Bachelor of Philosophy) and Cornell University in 1894. Married Christmas Williams, June 25, 1902. Began work with the Cleveland Leader, 1894, later successively telegraph editor Cleveland Press, news editor Scripts-McRae Assn., editor Architect and Builder and Inland Grocer (all of Cleveland); advisory manager at H.J. Heinz Co., Pittsburgh, Pa., 1904-1905; advisory manger National Lead Co., 1905-27; one of the founders of Audit Bureau of Circulations (including more than 3000 publications of U.S. and Canada), President 1920-27, managing director 1927-39. Member of United States Governments Division of Advertising of Com. on Pub. Information, World War I. President of the Technical Publicity Association, 1910-11; President Association of National Advertisers, 1911; Chairman of Advertising Council (Chicago), 1931; Member of the Board of Governors of Advertising Federation of America 1928-38, Chicago Federation of Advertising Clubs. Member of Phi Gamma Delta. Awarded the Bok gold medal, 1926, by Harvard School of Business Administration, "for distinguished service to commerce and industry." Was a Republican and a Protestant. Author of "Marketing a Nationally Advertised Product" (monograph) 1915; "Lead, the Precious Metal", 1924. Residence was at 3266 Lowry Road, Los Angeles 27.

There was an O.C. Harn in the 1928 Chicago city directory, and was still listed in the phone directory in 1945. He is listed as having an office on Wacker Drive, which is in downtown Chicago.

Special to The New York Times. New York Times (1857-Current file); Oct 12, 1955; ProQuest Historical Newspapers The New York Times pg. 31
ORLANDO C. HARN, 84, OF CIRCULATION UNIT
Santa Barbara, Calif., Oct. 11-Orlando Clinton Harn, one of the founders of the Audit Bureau Of Circulations, died yesterday afternoon in Cottage Hospital after a heart attack at his Santa Barbara residence. His age was 84.
Mr. Harn, who was born in Dayton, Ohio, studied at Ohio Wesleyan University and graduated from Cornell University with the class of 1894. His early newspaper work was in Cleveland, where he was telegraph editor of The Press and news editor of the Scripps-McRae Association. The Audit Bureau of Circulations compiles figures on some 3000 publications in the United States and Canada. He became its president in 1920 and was managing director, 1927-39. He also had been advertising manager of the H.J. Heinz Company and the National Lead Company.
The Bok Gold Medal was awarded to him in 1926 by the Harvard School of Business Administration "for distinguished service to commerce and industry". He wrote "Lead, the Precious Metal", "Marketing a Nationally Advertised Product". During World War I he was a member of the Government's Division of the Advertising Committee on Public Information. He leaves his wife, Merry.5 The cause of death was heart attack at his Santa Barbara residence.5 Obituary of Orlando Clinton Harn on 12 Oct 1955 in the New York Times.11

Throughout his many years in advertising, Harn was an active and influential participant in organized advertising. He was a founder and president of the Technical Publicity Association and the Association of National Advertisers. He was also a founder of the Chicago Federated Advertising Club and a director of the Advertising Federation of America from 1928 to 1938.

Perhaps Harn’s greatest contribution to advertising was his leadership of the Audit Bureau of Circulations. He was one of its key founders and served as its president from 1920 to 1927, he became the bureau’s managing director until 1939. More than any other man, he was responsible for the birth and successful growth of this bureau, which revolutionized American advertising and has served as a model for others around the world.

He was inducted into the Advertising Hall of Fame in 1958.12

Oscar Harn was the son of John Harn and Ida L. Johnson.

Oscar Cecil Harn as an old man in coveralls 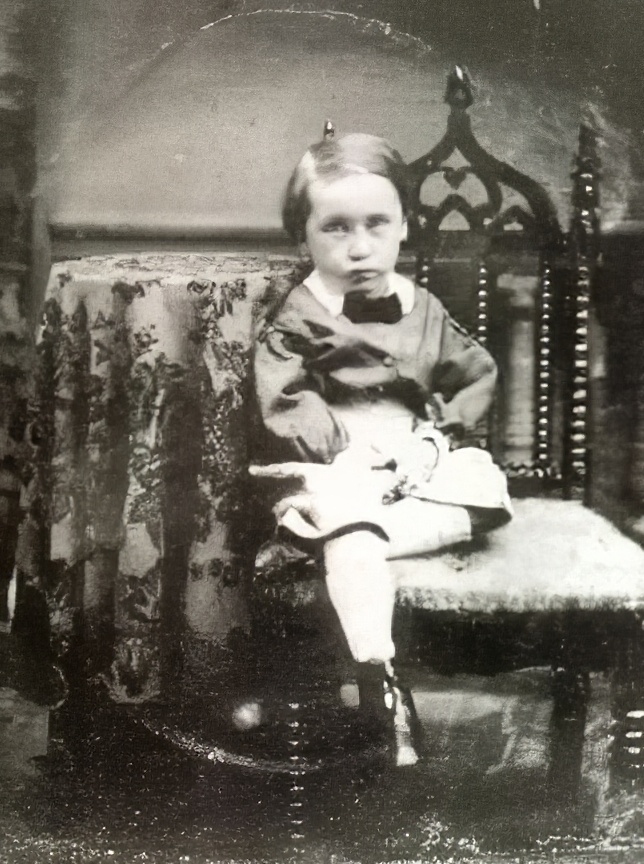 Oscar Cecil Harn as a child 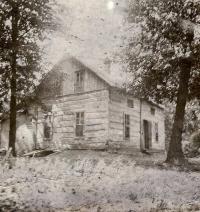 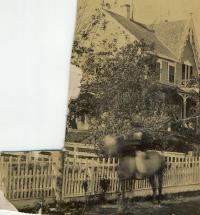 Oscar C. Harn on horse in front of his house in Faribault, Minnesota.

The following is from an undated (ca 1940) Faribault Daily News Newspaper:
Oscar Harn will be 82 years old next September. Since he moved from St. Anthony, then a town, itself, across the river from Minneapolis, he has seen a good deal of life in the vicinity of Faribault. There's nothing he likes more that to sit down, settle himself comfortably and relate interesting stories and anecdotes from out of the many things he's seen and done in the past. Mr. Harn combines a remarkable memory of names, places, and events with a real ability for telling a story and through his stories a listener can get a picture of life in Faribault and its vicinity in the time, when, as he says, "the French church was outside of town." Mr. Harn has another hobby that works well with his fondness for reminiscences. He collects old Indian relics, not with the passion that passion that sends some people out to spade up mounds, but with a casual, agreeable kind of interest. (article continues on a missing page)


Following from The Faribault Daily News newspaper of 27 June 1941 Friday, page 10, column 7.
Oscar Harn, 82 years old, passed away at the St. Lucas hospital at 6:40 a.m. this morning following a stroke. Funeral services will be held at the McCarthy Funeral Home at 2:30 Saturday, June 28, with the Reverend Walter Merzdorf officiating. The casket will be unveiled at the funeral home this evening. Burial will take place at Oak Ridge cemetery. Mr. Harn is survived by his widow, two daughters, Mrs. Donald Spilman of St. Paul (Doris), Mrs. Charles Swanke of Duluth (Betty), and three sons, David, William and Gerald, all of Faribault Mr. Harn was born in Minneapolis in 1858 and has been a resident of Rice county since 1869. Until he was 21 he worked as a book-keeper for his father at the Harn and Snyder Milling Co., after which he farmed at Cedar Lake until five years ago when he purchased a small home a French Lake where he lived until the present time.

Otho Harn was born circa 1788. He was the son of Caleb Harn and Sally Davis.

Patricia Marilyn Harn was baptized in 1932 at Presbyterian Church, Galesburg, Knox Co., Illinois.1 She was born on 20 May 1932 at Galesburg, Knox Co., Illinois.2,3 She was the daughter of Jerry Anson Harn and Ruby Helena Hulvey. Patricia Marilyn Harn married Robert Edwin Harris on 12 August 1955 at San Bernardino Co., California.2 Patricia Marilyn Harn died on 29 April 2013 at Columbia, Boone Co., Missouri, at age 80.2
Her married name was Harris. Patricia a Professor of English at the University of Missouri. She graduated at Pomona College, Claremont, Los Angeles Co., California, Bachelor Degree.2 She graduated at University of Missouri, Missouri, master’s degree and doctorate degree.2 She lived in June 1995 at 202 W Broadway, Columbia, Boone Co., Missouri.

Patricia Harris, 80, died Monday, April 29, 2013, in Columbia.
Services will be held at a later date.
She was born May 20, 1932, in Galesburg, Ill., to Jerry and Ruby Hulvey Harn.
On Aug. 12, 1955, she married Robert E. Harris.
Patricia received her bachelor’s degree from Pomona College and her master’s degree and doctorate from the University of Missouri. She taught elementary school in Lafayette, Calif., and was lecturer at the University of Missouri.
Patricia is survived by her husband, Robert; a daughter, Joan Marie Harris and husband John B. Aidun; grandson Ivan Aidun; granddaughter Ruby Aidun; two nieces; and two nephews.
She was preceded in death by a sister, Barbara Covey.
Arrangements by Columbia Cremation Care Center.

Paul D. Harn - Paul D. Hart, 57, of 113 Penn Street, Bentleyville, died unexpectedly in Timersburg, Clarion County, Wednesday morning, July 13, 1956. Death was due to a heart attack. Mr. Harn had gone to Timersburg earlier in the week with Rev. Jack Pease of the Pilgrim Holiness Church to ready the church camp for the season.
He was born at Luzerne, Fayette County, September 30, 1908, a son of the late Adam and Martha Huey Harn. He was a former employee of Mine 60 of the Bethlehem Mines Corporation. He retired two years ago because of poor health.
Mr. Harn was a member of the Pilgrim Holiness Church, Bentleyville, U.M.W. of A 1197, Cokeburg and the Bentleyville Sportsman's Association.
Surviving are his wife, Mildred Bock Harn; three children, Betty, wife of Angela Benedetti of Scenery Hill R.D.1; Gerald Harn of Tucson, Ariz, and Eugene Harn of Bentleyville R.D.1; 13 grandchildren, and two sisters, Mrs. Lloyd Shaw of Bentleyville and Mrs. John Weaver of Niles, Ohio. A daughter, Mrs. Louise Kotchman is deceased.