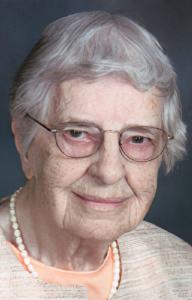 She was born in 1912, in Featherstone Township, the daughter of Charles and Clara (Kolshorn) Bang. She attended rural school District #20 in Hay Creek and graduated from Red Wing Central High in 1929, and from the Junior College of Red Wing Seminary as well as St. Olaf College. She also attended one year of graduate school at the University of Iowa. She worked for 35 ½ years in the home office of Bankers Life Company, now Principal Financial Group, in Des Moines, Iowa.

After retirement, she returned to Red Wing in February of 1974. She was a member of St. Paul's Lutheran Church and Chapter P of PEO. She enjoyed traveling, picnics and nature-especially outings looking for wild flowers, eagles and migrating swans and geese.

She is survived by her nephew and nieces, Larry (Carol) Perkins of Red Wing, Rhoda (Marlyn) Rusch of Hollister, Mo., and Carol (Vern) Draheim of Bricelyn and many grand and great-grand nieces and nephews.

She was preceded in death by two sisters, Myrtle Bang and Vivian Perkins and two infant brothers.

Memorial service will be 11 a.m. Saturday, March 24, at St. Paul's Lutheran Church. Visitation will be for 1 hour prior to the service. A private family burial will be at Oakwood Cemetery. Memorials preferred to the church.1 She was buried on 24 March 2012 at Oakwood Cemetery, Red Wing, Goodhue Co., Minnesota.1,2

Vivian Dorothy Bang was born Nov. 2. 1909, in Featherstone Township. She attended school in Hay Creek and graduated from Red Wing Central High School in 1927. She graduated from the University of Minnesota School of Nursing in 1931, and worked at Charles Miller Hospital in St. Paul until 1935. On Aug. 8, 1935, she married Vernon L. Perkins, and they were the third generation to farm the Perkins farm and apple orchard. They moved to Red Wing in 1986. She was a 4-H adult leader, belonged to the Home Extension Group, and was a member of Chapter P of the PEO and St. Paul's Lutheran Church.

Survivors include a son, Larry (Carol) of Red Wing; two daughters, Rhoda (Marlyn) Rusch of Hollister, Mo., and Carol (Vernell) Draheim of Bricelyn, Minn; 15 grandchildren; numerous great-grandchildren; and a sister, Ruth Bang of Red Wing. She was preceded in death by her husband on March 31, 1987, a sister, two infant brothers, and a great-grandson.

The following undated obituaries were in a letter from Mildred Harn in March 1995:
Martha E. Harn, 92, of Cleveland, Ohio, died Friday in Deacons Hospital, Cleveland. Surviving are two granddaughters; five great grandchildren; a step-brother, Ray Barnhart, Leckrone and a stepsister, Helen Carrick, McClellantown. Friends will be received in the Dearth Funeral Home, New Salem, Monday 3 to 5 and 7 to 9 p.m. and Tuesday until 1:30 p.m.

Typo to birthplace name in obit. should be Fort McKinney, which is 3 miles northwest of Buffalo, WY. (The fort served as a peace keeping presence in the Big Horn area until it was abandoned in 1894 (some Buffalo
residents thought this was in reprisal for their role in the 1892 Johnson County War.) The site (with three original buildings) is now the Wyoming Soldiers and Sailors home.) The cause of death was congestive cardiac failure, hypertensive heart disease (30 years), generalized arteriosclerosis (30 years), osteoporosis & osteo arthritis.1 She died on 28 October 1969 at San Antonio, Bexar Co., Texas, at age 88.1 She was buried on 31 October 1969 at Mission Burial Park, San Antonio, Bexar Co., Texas. Her Social Security Number was 467-74-4477.