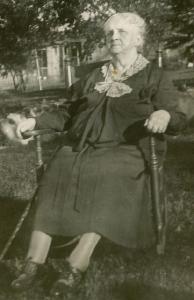 Following from The Red Wing Daily Republican Newspaper, page 2 column 6, 16Jul1934 (Monday).
Mrs. Vilette Ellsworth Perkins, 92, beloved pioneer woman of this community and mother of M.T. Perkins of Red Wing, died at the home of her grandson, Richard Jones, in Minneapolis at 11 a.m. Sunday. Death was due to infirmities of old age. Mrs. Perkins had been confined to her bed for the past six weeks.
Mrs. Perkins was born on Oct. 10, 1841, at Phillips, Me. She came west in 1860 and settled on a farm in Featherstone township and resided there until about 40 years ago, when she removed to Red Wing, which remained here home until last March when she went to Minneapolis to live with her grandson.
In 1859 she was united in marriage to Hartson E. Perkins, who died on July 19, 1899. Mrs. Perkins was a kindly Christian woman, who was highly respected by all who knew her. She possessed her faculties to an unusual degree for one of her age up to the time of her death.
Surviving are three sons, Dr. B.T. Perkins and Dr. E.A. Perkins, Houston, Texas, 20 grandchildren, 28 great grandchildren and one great, great grandchild. The funeral will be held Tuesday afternoon at 2:30 o'clock at the Betcher Memorial chapel at Oakwood cemetery, Rev. Everett Hall, pastor of the First Methodist church, officiating. Burial will be at Oakwood cemetery.

Children of Joseph Embree and Catherine (?)

Children of Mark Allan Embretson and Carol A. Fredrickson

Stacy Embretson is the daughter of Mark Allan Embretson and Carol A. Fredrickson.

Christina Erickson is the daughter of Rodney Erickson and Mary Faith Squires.

Following from the book HISTORY OF FREDERICK COUNTY, MARYLAND, by T.J.C. Williams, reprint of the 1910 edition, Published in 1967 by Regional Publishing Company, page 1305.
Samuel A. Eury, farmer, resides in Linganore District, Frederick County, Md., son of Samuel and Mary (Lugenbeel) Eury, was born on the farm on which he now lives, in Linganore District, July 19, 1841.
Mr. Eury's ancestors were Germans. His grandfather, Samuel Eury, spent his life in farming, at first in Linganore, and later in Liberty District, where he owned the farm that is now the property of Luther Harn, of Unionville, Md. He was married to Miss Boyer.
Samuel Eury, father of Samuel A. Eury, was born on his father's farm in Frederick County, and received his education in the schools of his native county. His whole life was devoted to the cultivation of the soil.
After his marriage, he purchased his homestead, the farm on which his son, Samuel A., resides. Samuel Eury was married to Mary, daughter of William Lugenbeel. Their children are: 1, Margaret (Mrs. Abner Harn), deceased; 2, Susan (Mrs. William Brightwell), deceased; 3, Lydia (Mrs. Dennis Butler), deceased; 4, John William, deceased, a brave soldier, fought all through the Civil War as a private in the Seventh Maryland Regiment, married Miss Allison; 5, David Washington, deceased; 6, Mary Ellen (Mrs. Evan J. Aldridge), of Frederick County; 7, Samuel A. Mr. Eury died at the homestead in 1869, aged sixty-nine; his wife died on the home farm.
Samuel A. Eury received his education in the public schools of Unionville, Md. He grew up on his father's farm and was set to ride the saddle horse when he was a very small boy. Mr. Eury worked hard, assisting with all the work of the place, and after his father's death rented the homestead from his mother. When she died, Mr. Eury purchased the property, which he has improved in every respect. He is an intelligent farmer, and a reliable citizen, highly esteemed in the community. He is a staunch Republican.
Samuel A. Eury was married, in 1869, to Annie Elizabeth, daughter of Jacob and Elizabeth (Gilbert) Zumbrun. Their children are: 1, Harry, married Elizabeth Bryant, resides in Kentucky; 2, Jesse, married Jennie Lee Watson, resides in Kentucky; 3, Stanley Benton, married Bessie Appleby, has two children, Annie and Cecil. Mr. Eury and his wife are members of the Methodist Episcopal Church. Mrs. Eury died in February, 1903; she is buried in Linganore Chapel.