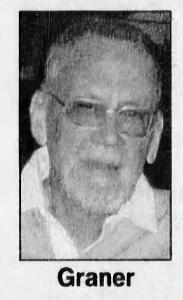 John "Jack" Graner, 60, of Glendale, Ariz., passed away peacefully on Monday (May 5, 2008). Jack was born Jan. 19, 1948 in Mason City to Lewis and Frances Graner. He is survived by Cheryl, his wife of almost 40 years; son, Matt (Emma) Graner; daughter, Erin (fiance Scott Martin) Graner; and two granddaughters, Kathryn and Julia Graner; as well as his siblings, Mildred (Norman) Mondahl, MaryLou (John) Behm, Patricia (Larry) Szymeczek, Barbara (John) Alitz, Lewis (Harriet) Graner, and his twin sister, Joan Evans. Jack was a strong, hardworking and compassionate family man who gallantly battled cancer over the past four years. Through his faith in God, family and friendship he endured and persevered until the Lord was ready to call him home. The family will celebrate his life with memorial services at 10 a.m. Monday, May 12, at Phoenix Memorial Park 200 W. Beardsley Road, Phoenix, Ariz. The inurnment will follow the service.

He is survived by Harriet, his wife of almost 16 years; stepchildren, Scott (Elizabeth) Hage, Deborah (Rudy) Hanuman and Michael Hage; grandsons, Samuel and Joseph Hage, Connor Hage, De and fiancée Katie Olson, Chasity and Dustin Hanuman; as well as his sisters, Mildred (Norman) Mondahl, Marylou (John) Behm, Patricia (Larry) Syzmeczek, Barbara (John) Alitz, and Joan Evans; sister-in-law, Cheryl Graner; several nieces and nephews and many, many friends.
Lewie attended Holy Family Elementary and Newman High School in Mason City, Iowa. He received his last rites on Tuesday, Dec. 23, 2008, and had great comfort in this blessing.
Lewie began his life as an iron worker before becoming a painting contractor. He lived many years in California, returning to Iowa to spend quality time with his family.
He married Harriet Hage on April 10, 1993. They lived in Nora Springs before moving to Casa Grande, Ariz. He then acquired his real estate license where he and Harriet worked as a team for Century 21 Arizona Foothills.
Fishing was his passion and he loved all sports, especially the Vikings football team. He was a fun-loving, happy man who made friends with any stranger. He enjoyed gardening and growing tomatoes.
Lewie was preceded in death by his parents, Lewis and Frances Graner; and a brother, John “Jack” Graner.
An open house was held at his home, 1729 E. Shasta St., Casa Grande, from 1 to 3 p.m. Saturday, Jan. 3, 2009. Following at 5:30 p.m., a Mass was said in his honor at St. Helen of the Cross Roman Catholic Church, 205 W. 8th St., Eloy, AZ.
Lewie had a long and courageous battle with tongue cancer. Words cannot express how he will be missed.1

The cause of death was tongue cancer.1,3

Mary died from a blood clot in the lungs and heart very suddenly. She had fallen when on a hike in Taylor Falls (Minnesota) a couple weeks earlier with friends. She had got a large cut in her leg. Mary took off Friday 12 Nov 2004 to go to the doctor, as her leg was red and swollen with shooting pains. The doctor ordered a MRI for Monday 15 Nov 2004, as he thought it was only inflamed. Saturday morning 13 Nov 2004 when her husband came home from the library getting her a book for the book club, he found she had died in their apartment. Mary Ellen Gray died on 13 November 2004 at age 52. She was buried at Oak Hill Cemetery, Minneapolis, Hennepin Co., Minnesota, Plot: 2nd Addition, Block 36, Lot 7, Space 1

There is no burial record or death certificate on file at Oak Hill Cemetery for Mary Ellen Gray. It would appear her name on the marker of her Mother is a memorial remembrance only.2 Following is obituary for Mary:

[Send Reply] RE: Kenneth Gray
Dear Larry - We're wondering if it's possible for Dad's surviving family (his children) to leave a note of explanation on his page regarding the wrong birth date and false name "Methodius" on his stone so that anyone doing genealogy work would know they had the right person when viewing this site. Kenneth Gray was born in 1917 according to his adoption paperwork, school records, the 1920 and 1930 census, etc. When he returned to the US after WWII from civilian construction work in the Azores he reinvented himself for reasons unclear to us, making himself four years younger and using "Methodius" for his first name when he met and married our mother. He was able to get a new social security account using that false birth date which is why the death record says 1921. We had no idea of any of this until several years after his death when we came across some of his records and then started checking on everything.
Added by Elizabeth Gray on Sep 19, 2016 3:51 AM

Inscription:
Methodius Kenneth Gray is the name on the memorial marker.

NORWICH — Ruth Torbert Bortner, 90, formerly of Unadilla, passed away Saturday, Feb. 2, 2002, at the Valley View Manor Nursing Home in Norwich.
She was born Dec. 22, 1911, daughter of the late David Ambler and Mary Lithgo (Graybill) Torbert in Gatchellville, Pa.
Ruth married Harry Leroy Bortner on Aug. 28, 1937, in East Berlin, Pa. He predeceased her on July 8, 1996.
She is survived by two daughters and sons-in-law, Sylvia and David Schrader of Shippensburg, Pa., and Rebecca and Edmund Hillick of Mount Upton; and five grandchildren, David L. Schrader Jr., Daniel O. Schrader, Sandra Schrader, Amy Hillick and Nathan Hillick.
She was predeceased by three sisters.
A memorial service will be held Saturday, Feb. 16, 2002, at the Zion Lutheran Church in Glen Rock, Pa., at 11 a.m.
Memorial contributions may be made to the Valley View Manor Nursing Home, Park Street, Norwich, NY 13815.
Arrangements are under the direction of C.H. Landers Inc., 21 Main St., Sidney.