Children of Henrietta Estelle Harn and Edwin May Frink

Henry Harn was born circa 1857 at Illinois Henry was 13 years old in 1870 Illinois Census. He was the son of Jonathan Harn and Susan Crabtree.

Henry Harn was born in 1892 at Illinois According to 1900 Census, Henry born in 1892 in Illinois. He was the son of Reason E. Harn and Martha Jane McNeil.

The following undated obituary, was in a letter from Mildred Harn, Mar 1995:
Henry Harn, aged 70 years, died at his home near Arensburg ferry, Sat. afternoon, Mar. 6, 1926. He was a son of the late Robert Harn and is survived by 3 sons and 2 daughters. Buried in Hopewell Cemetery.
[Note: 4 sons, Wesley, Wm., Albert, Harry, and 1 dau. Pernina (Nina) Robbins] He was buried at Hopewell Presbyterian Cemetery, Luzerne, Fayette Co., Pennsylvania.4 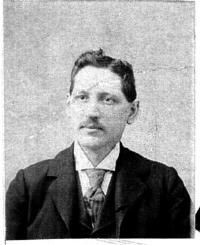 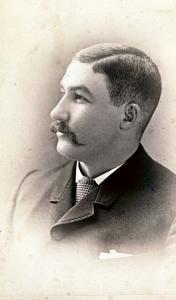 HARN, Ellis S., wife, born on April 1863 in MN, 37-years old, father born in New York and mother born in Kentucky. Has had only one child.

The following undated obituary, was in letter from Mildred Harn March 1995:
Herman Harn 25, died June 20, 1932. He was crushed under a slate fall, while working in the Wierton Coal Company's mine at Isabella. His body was removed to the mortuary of Funeral director Paul R. Seeman, Carmichaels. He was a son of Mr. & Mrs. Wesley Harn of East Millsboro, Pa. In addition to his parents, he leaves his wife, Mrs. Ada Harn, and a small daughter, Josephine, and 14 brothers and sisters. Funeral in Hopewell Presby. church, in charge of Rev. R.C. Van Eman, and burial in the church cemetery.

Hester Harn was born abt 1772-1775 at Maryland.2,3 She was the daughter of John Hearn and Dorcas Davis. Hester Harn married John Davis, son of Garrard Davis Sr. and Nancy (?), abt 1792-1794 at Frederick Co., Maryland.4 Hester left Maryland with her husband, his father and her brother-Elijah in 1795. The father and brother went to Kentucky.3 In 1828, John Davis and Hester Harn emigrated to Shelbyville, Indiana.3 Hester Harn died on 11 October 1831 at Fleming, Cayuga Co., New York.3 She died on 11 October 1831 at Maryland.2 Ellen Dorcas Harn Manuscript. She was buried at Davis Cemetery, Morristown, Shelby Co., Indiana.5

Hester C. Harn was born circa 1800.1 He was the son of Mathias Harn and Amelia Shipley. Hester lived with John Douty, son of Corrilla Harn Douty. She nursed John's wife, who was an invalid.2 Hester C. Harn died on 13 February 1879 at Unionville, Frederick Co., Maryland.3,2 He was buried at Douty Family Cemetery, Harrisonville, Cass Co., Missouri.1

Hillie M. Harn was also known as Hallie. She was born in October 1881 at Maryland info from 1900 Census. She was the daughter of Samuel E. Harn and Barbara Anna Nicodemus. Hillie M. Harn married Benjamin Grant Danner. Hillie M. Harn died in 1967.1 She was buried at Linganore Cemetery, Unionville, Frederick Co., Maryland.1

Children of Hiram Maywood Harn and Addie May Smith

Horatio Harn was born circa 1787 at Maryland. He was the son of John Hearn and Dorcas Davis.

Howard Harn was the son of Stephen Peter Harn and Ruby Louise Lamb. 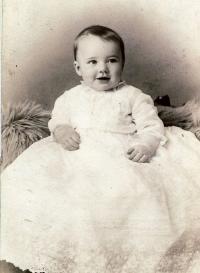 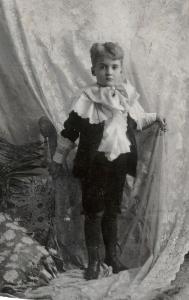 
S.U.I. ROMANCE IS SHATTERED AT ALTAR

The story comes to this city of the shattered romance of two former students of the University of Iowa, Miss Freda J. Beaver of Ida Grove and Hugh Val Harn or Mason City. The wedding of these two young K people who are well known in this city was to have taken place Monday, Sept. 1, but after all arrangements were made to the smallest detail, the groom created no little stir by failing to appear. Invitations had been sent out, a number of showers and social functions had been given in honor of the prospective bride. The wedding breakfast ready and the groom was scheduled to arrive Saturday, Aug. 30. The bride was at the station to meet her future spouse but he failed to put in an appearance. Later trains did not bring him and no reason came for his non-appearance. Miss Beaver finally reached the young man's office by telephone but was told he was too busy to talk. A second call brough the information that he "did not care to talk." So far the bride, her parents, Mr. and Mrs. Will A. Beaver, and guests can find no explanation for the action of the bridegroom. The newspapers of Ida Grove, the bride's residence, have hurled the name of "cad" and "coward" at the former Hawkeye student and the whole community seems thoroughly indignant over the occurrence

The following material was presented by Lew C. Church, in Memorium of Hugh Val Harn; and was located at the Hennepin County Bar Association in Minneapolis, MN.
Hugh Val Harn was born at Winona, Minnesota, on February 14, 1891. Of Walsh and English ancestry, he was the son of Herbert and Alice Harn. His early education was obtained in the City of his birth, and in the grades and high schools at Mason City, Iowa. In 1912, after three years as a student at the University of Wisconsin, he entered the University of Iowa, and graduated from its law department in 1916. In the latter institution he had the distinction of election to the presidency of the senior law class. A clipping from a Mason City newspaper of that time refers to him as having been among the best as high school student, a leader at the University of Wisconsin, an outstanding personage in law school, and a young man of promise, highly regarded in the community. During vacations he had worked as a reporter on the Globe Gazette of Mason City, and enjoyed the esteem of his employer.
Upon attaining the age of twenty-one he was admitted into the Masonic Lodge in that place, all officers participating in the ceremony being past masters. Mr. Harn was admitted to the Bar of Iowa in 1916, and at about the same time was made Secretary of the local Chamber of Commerce.
On July 25, 1918 he enlisted for service in the World War, and served as a member of Iowa Company A, Third Regiment. At the time of his discharge he was a private at Headquarters Detachment, Camp Gordon, Georgia. There he taught marksmanship, having been given medals for his skill in that art while a member of the Mason City Guards.
In 1923 Mr. Harn came to Minneapolis, was admitted to the Bar of this State, and was received into the real estate office of Nickels and Smith by the late Fred G. Smith. From that time, and nearly as long as he was able to be active, he was occupied both as a lawyer and in the real estate business in the Nickels and Smith office, where he had been elected one of the officers and directors of the corporation. He was a hard worker, and his law practice was largely an office practice of real property law.
In religious faith he was an Episcopalian, having been baptized at Winona by Bishop Thurston. He united with a church of that denomination at Mason City, and was a communicant of St. Mark's Church in Minneapolis at the time of his decease. For quite a good many months before his passing, which occurred on May 16, 1937 at the United States Veterans Hospital near Fort Snelling, he was not at his best; and for some time was unable to go to his off at all.
As a business friend the writer of this paper knew him well during most of the period of his residence in Minneapolis, and had many business contacts with him; and now looks back upon him as one of the most loyal of friends.
He was buried at Lakewood Cemetery, Minneapolis, Hennepin Co., Minnesota.11

Ida Harn was born circa 1883. She was the daughter of Milton Hamilton Harn and American Olivia Hackett. Ida Harn married George Perkins.

Ida Harn was born on 4 January 1877 at Illinois. She was the daughter of Winfield Scott Harn and Fannie Louisia Stein.1 Ida Harn married P.C. Lindsay.1 Ida Harn lived in March 1922 at Arlington, Washington Co., Nebraska.1 She died on 27 May 1964 at Los Angeles Co., California, at age 87.

Ida Rebecca Harn was born on 26 October 1858 at Frederick Co., Maryland.1,2 She was the daughter of James William Harn and Mary Hanna Fitch. Ida Rebecca Harn died on 17 February 1877 at Dayton, Montgomery Co., Ohio, at age 18.1,2 She was buried on 18 February 1877 at Woodland Cemetery and Arboretum, Dayton, Montgomery Co., Ohio.3,2